Polkadot Is Trying to Reverse Trend; While Tamadoge Warms up to a Great Start

Polkadot trend reversed after it was rejected at the upper limit around the 10th of this month. Furthermore, since around four days ago this crypto has been trying to break the fall. However, it appears as if, buyers are still too weak to initiate a reversal.

Will this current trend eventually reverse? As of now this question will only get answered after we have critically studied developments in the market.

Polkadot Is Trying to Halt Downtrend; But Tamadoge Future Is Bright

The DOT/USD daily chart showed that there have been attempts to stop the initiated downtrend following a downward rejection. However, we can conclude that these attempts have been unsuccessful, seeing that price continued its downtrend after the attempted breaks. Furthermore, Polkadot’s price action has broken down the middle band of the Bollinger indicator. Howeve, recently inverted hammer candlesticks have just appeared. Consequently, this could be indicating that a change in trend is building up.

Nevertheless, the MACD indicator isn’t yet reflecting any changes in the current trend. This can be seen as the curves of this Indicator keeps plunging, and its histogram keeps building on the negative side. However, should a more bullish candle appears subsequently, changes will be reflected, and the trend will reverse. In this market traders have two choices, they can either with for price to hit the lower for a rebound upwards. Traders can wait for another bullish candle to show up because that would Indicate the beginning of an upward correction. From here, Polkadot may eventually then find resistance around $9.200 and $9.500. 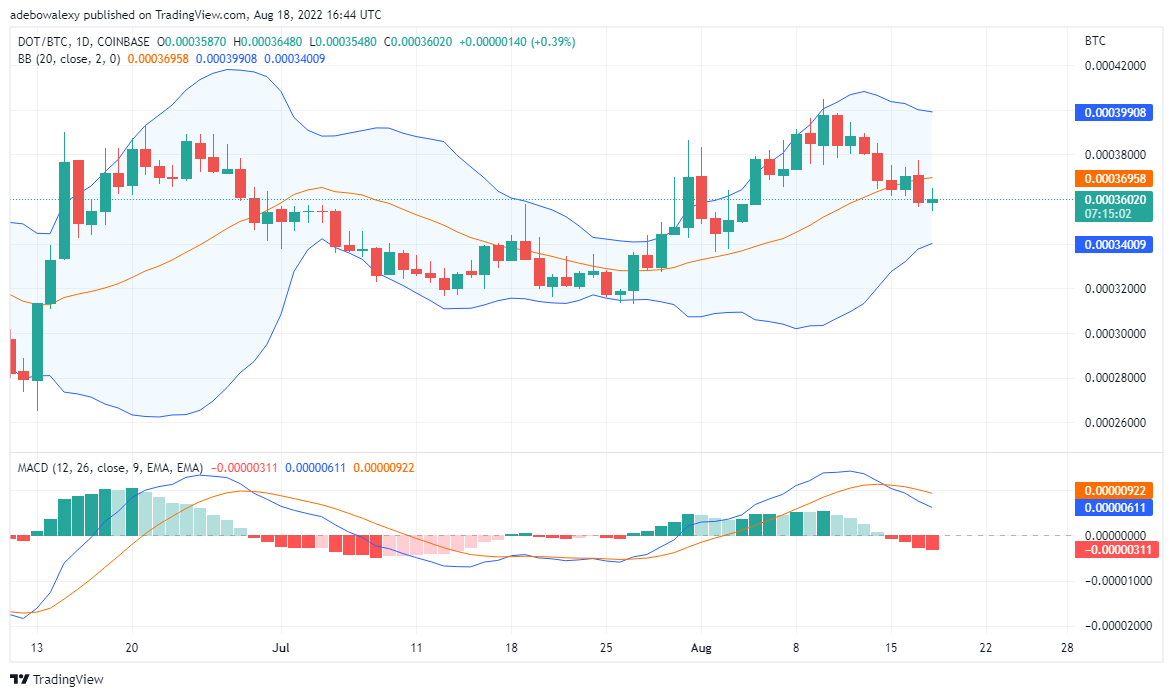 Examining the DOT/BTC daily chart, we’ll see that this market maintains the same market behavior as the DOT/USD. Nevertheless, developments in the Polkadot’s and Bitcoin market against the US dollar will also influence price dynamics in this market. More buyers are needed in this market to correct this Downtrend to the upside direction.

Tamadoge is also securing strategic listings on centralized and decentralized exchanges as part of its roadmap. The first listing has already been secured on LBank. LBank is a centralized exchange, and the Tamadoge team is optimistic that TAMA could be paired with ETH to support the project’s rapid growth as it faces improved liquidity.

BNB Trades under Pressure while Tamadoge Bounces to the Upside

Russia announces plans to release digital ruble to banks in 2024