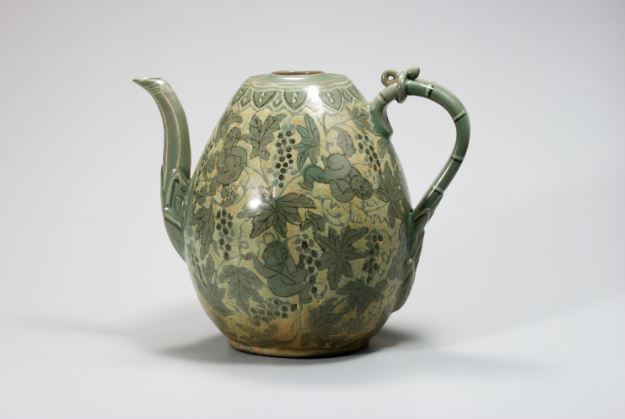 This photo, provided by the National Museum of Modern and Contemporary Art Korea, shows a celadon ewer with a design of grapes and children from the Goryeo Dynasty.

“DNA: Dynamic & Alive Korean Art,” a new exhibition organized by the National Museum of Modern and Contemporary Art Korea (MMCA), is an effort to answer this question.

The exhibition, taking place at the MMCA’s Deoksu Palace wing in central Seoul, brings together artworks of various formats, genres and eras to highlight different facets of Korean aesthetics.

Under the four themes of “Sacred and Idea,” “Elegant and Simple,” “Decorative and Worldly” and “Dynamic and Hybrid,” the exhibition takes visitors on a journey transcending time to explore the definition of Korean aesthetics.

The exhibition offers visitors a chance to take in different artworks that are usually on show at different rooms or exhibition venues at a single venue.

A 18th century portrait of a Joseon-era beauty by legendary painter Shin Yun-bok is on display alongside a 1978 painting by Cheon Kyeong-ja that shows a woman with a cigarette. 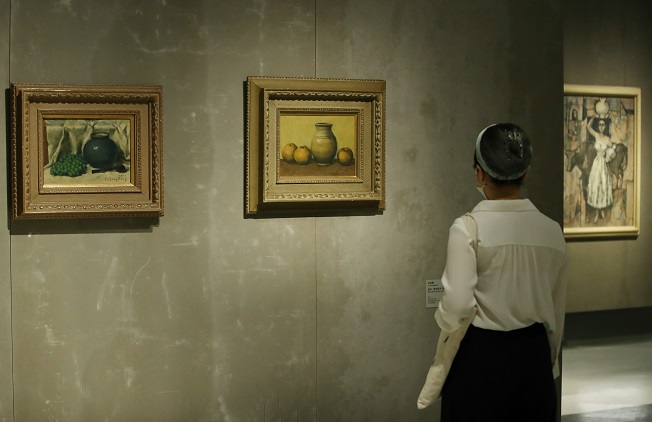 A visitor looks at artworks on display at the “Dynamic & Alive Korean Art” exhibition on July 6, 2021. The exhibition takes place at the National Museum of Modern and Contemporary Art Korea’s Deoksu Palace wing in central Seoul until Oct. 10, 2021. (Yonhap)

Shilla-era gold crowns, designated as national treasure, are meanwhile on exhibition next to modern-day crafts that were inspired by the meticulous jewelry.

Another highlight of the exhibition is four pieces of artworks that are among the vast “Lee Kun-hee collection” that late Samsung Chairman Lee Kun-hee’s family donated in late April. It is the first time that the collection is being shown in Seoul.

The exhibition runs through Oct. 10.