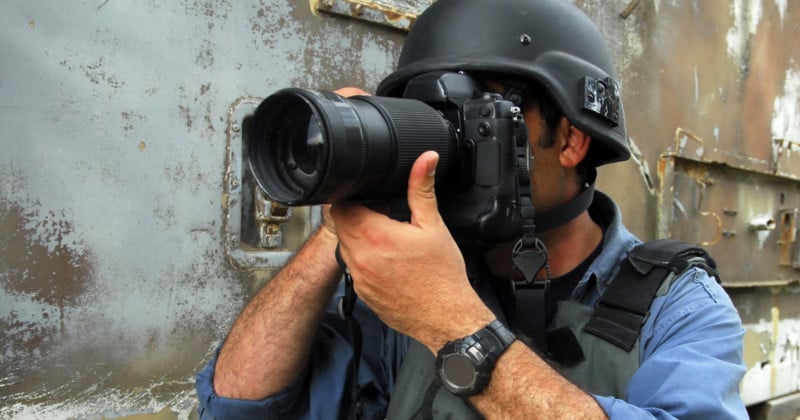 A Lisbon, Portugal-based photographer who worked for the news agency Agence France-Presse (AFP) is attempting to regain control of the copyrights for his images. To block him, AFP is stating no photojournalist deserves protection under copyright law, which could upset the entire industry.

In a report from the Press Gazette, former photographer for AFP Francisco Leong — who started working for AFP in 2005 and left the agency in 2019 — is arguing that the contract he signed with the international news agency which gave copyrights to the agency and not the photographer was in violation of Portuguese law — specifically its Journalist Statue and Code of Copyright — which states that the ultimate rights to journalistic work even through the course of employment belong to the creator. As such, Leong argues that his contract is null and void and that the copyrights to the images should be returned to him.

“I am claiming my copyright because AFP held my pictures after [I left] instead of sharing the profits with me same as the French photographers and keeping the money for themselves… I want justice,” Leong said to the Gazette.

The case also alleges discrimination, as AFP does not recognize the copyright for journalists and photographers on French contracts who are not French. Leong insists that he is not seeking any monetary compensation, but only wants the rights to the photos he took.

In an attempt to block him, AFP has argued to the Sindicato dos Journalists (SJ) — Leong’s union — that the news it distributes is part of the public domain and does not deserve copyright protection, as it claims that it and its journalists are “mere vehicles that broadcast to the public the set of facts that portray a particular daily event or news.” Additionally, AFP says that “mere news or photographs that merely report news events are not creative, do not possess originality, and, as such, do not deserve legal protection.”

Leong’s union says that this stance is akin to a “scorched-earth policy” that could “threaten the livelihoods” of photojournalists and agency journalists across Europe if it wins in EU court. According to the union, such a ruling would make it so that agencies like Reuters and Getty could no longer charge clients for news journalism, as all photos would be in the public domain. It would dramatically upset a gigantic portion of the photo industry.

“If the court rules in favor of AFP on this point, the business model of all news agencies will be put at risk, and thus the jobs of thousands of journalists,” SJ says. “That is because if journalists lose protection over their work as it is not eligible for protection, logically their employers cannot claim protection over it either.”

“Francisco Leong’s photos are not in the public domain because the rights belong to AFP, regardless of whether they are subject to copyright under Portuguese law,”an AFP spokesperson told the Press Gazette.

“AFP appears to be waging a scorched-earth policy against non-French staff,” SJ said in a letter to the International Federation of Journalists and European Federation of Journalists. “The risk is that journalists everywhere will get burned. We urge our fellow unions to make their members aware of this case and be prepared to defend our economic rights to our journalistic works.”

Leong has requested Lisbon’s Labor Court intervene in the case before AFP’s defense can be heard, the hearing for which has been delayed from what would have been in late June to October 6.