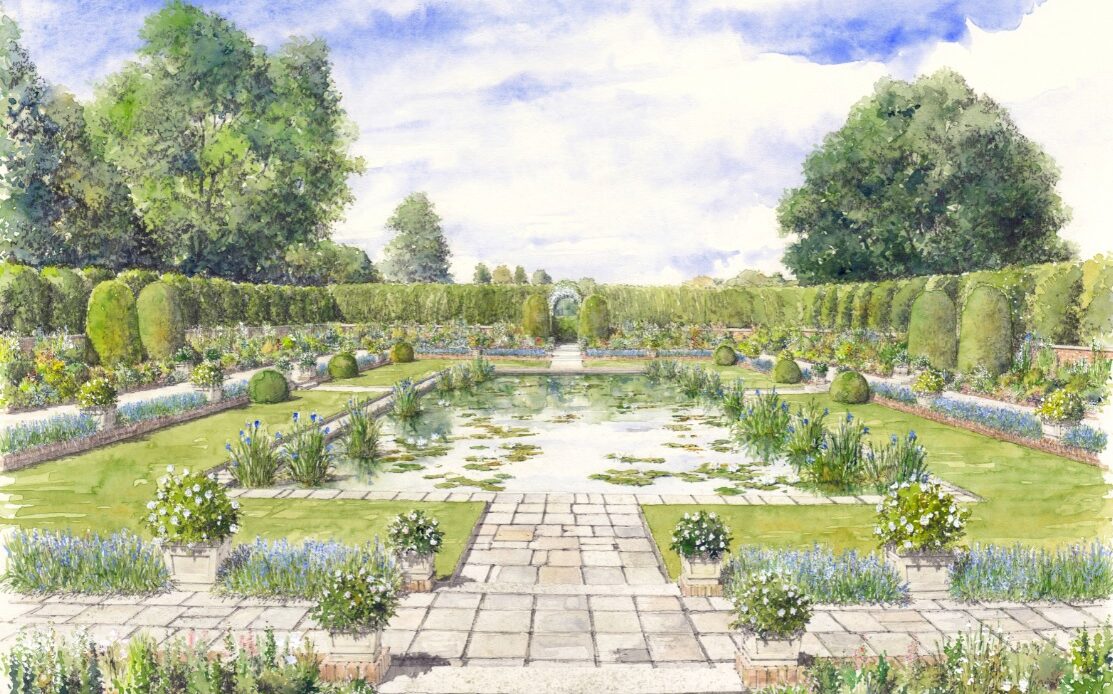 One of Diana, Princess of Wales’s favourite locations has been redesigned as it becomes home to the statue commemorating her life and legacy.

The Sunken Garden at Kensington Palace has been reshaped and now includes even more of Diana’s favourite flowers. The new layout has been revealed just hours before her sons, the Duke of Cambridge and the Duke of Sussex, unveil the statue they commissioned to celebrate their mother which will sit amidst the blooms.

The Sunken Garden has been redesigned by Pip Morrison, working with the Gardens and Estates team at Historic Royal Palaces which cares for Kensington Palace. They have spent over 1,000 hours planting flowers and bulbs in the garden with more than 4,000 plants taking root under their care.

Among them are forget-me-nots, Diana’s favourite flowers, as well as more than 200 roses, 500 lavender plants and 300 tulips. The garden also features sweet peas, another royal favourite, and a flower whose modern development is closely linked to Diana’s ancestral home, Althorp House.

Pip Morrison described it as a ”very special” project to be involved with, adding ”we have worked carefully to ensure that the new layout and planting scheme compliments the statue, providing a calming place for people who visit Kensington Palace to remember the Princess.”

The Deputy Head of Gardens and Estates at Historic Royal Palaces, Graham Dillamore, led the team of five gardeners who worked on the redesign. He said ”while she was in residence at Kensington Palace, Diana, Princess of Wales regularly admired the changing floral displays in the Sunken Garden and would always stop to talk to me and the other gardeners who cared for it. Over three decades later, I’m honoured to have been part of the team preparing the gardens for the installation of the statue.”

Diana was famously fond of the Sunken Garden, which was created in 1908 under the guidance of King Edward VII. It was originally inspired by the Pond Garden at Hampton Court. In 2017, the area was planted with all white flowers in honour of the Princess to mark the 20th anniversary of her death.

The statue of Diana, designed by Ian Rank-Broadley, will be unveiled by William and Harry on July 1st 2021, the 60th anniversary of their mother’s birth.

Read More: Take a look at Diana’s favourite garden which has been redesigned to welcome her